I just learned I’m a  “Hispanic-fluential.”

“Hispanic-fluentials spend more time per week interacting with others online (30 hours) than the general population of U.S. influencers, called e-fluentials (25 hours). according to a study done by Burson-Marsteller. 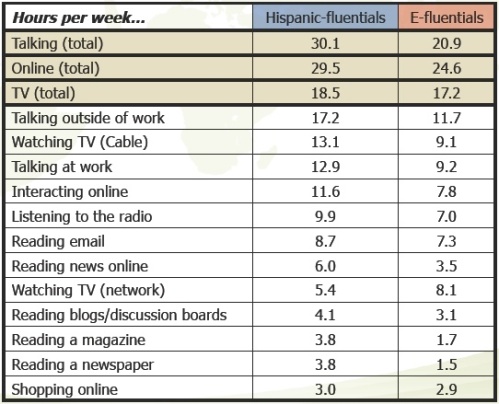 I match all the characteristics and habits of a Hispanic-fluential because I’m online more than my any of my peers; I talk about brands more often than any other group  and I talk OFF-line, in face-to-face conversations, more than my  peers.  I’m thinking I’m a pretty important person or persona to brands.

So why aren’t more brands talking to ME? When I say “talking” I mean conversations in Twitter and Facebook; and marketing campaigns specifically targeted at Hispanic-fluentials. Surely these companies who want to increase revenue pay attention to the latest data regarding Social Media marketing and Social Networking, don’t they? Data like this, from this fascinating study by Burson-Marsteller:

Maybe these companies simply don’t know that I’m a powerful word-of-mouth consumer -or- they don’t know how to go about marketing to Hispanic-fluentials.

“Hispanics cultivate the most extensive personal and professional networks both online and offline among the efluentials studied, attesting to the potential effectiveness of grassroots and viral campaigns,” said Theresa Rice, Director, US Hispanic for Burson-Marsteller.

We spend more time online but more importantly, we spend more time OFFline, talking to each other in face-to-face conversations. I’m living proof: when I meet someone in Twitter who brings great value, I want to get to know them more, so, after tweeting and emailing each other, I like to take it to the next level and talk on the phone, if they’re not in my part of the country–or if they are, I’ll arrange a meeting. This habit has resulted in personally and professionally enriching my life.

A Social Revolución is happening in Social media. Why aren’t we hearing more about this outside of the people who are part of it?

I’ve got an hot tip for you, big companies, (if you’re listening): Check out Latinos In Social Media and review the LATISM directory of  professionals: bloggers, Social Media marketers, PR agencies, consultants, thought-leaders, authors, mami bloggers and more. It’s a unique gathering of resources for partnerships and collaborations with the people that Hispanic-fluentials quite often turn to before purchasing products and services: their Latino/Hispanic peers.

Update: A complimentary blog post was written and published today, Black Like Me? The Missing Faces in Technology and Innovation by Robin Caldwell over at the Huffington Post. Please read it and post your comments. She poses a great question.

Have you heard the great news? Latinos In Social Media (#latISM) was born and is a rapidly-growing group. Just in time, too, because I was beginning to feel a little lonely out here. But the more I reached out to other Latina(o)s through LinkedIn, Twitter and Facebook, the more I felt like I was coming home. Befriending people within my culture is like gathering together with mi familia, who all welcome me and celebrate with me–without hesitation, with trust, and with an all-knowing embrace like primas y primos reuniting, singing, dancing–only we’re blogging, tweeting, getting LinkedIn together and building a country of Latinos on Facebook.

“With 21 million projected Latino internet users by 2010, Latinos are adopting social media as their primary source of communication, news and entertainment faster than any other group.  Their buying power is projected to reach $1.3 Trillion by 2013.” —latISM.org 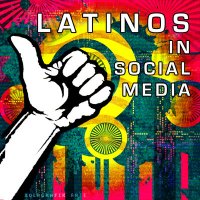 This group is for all the Latinos who blog, tweet, connect, tag, bookmark, work & enjoy Social Media!

We are the central resource for Latino(a)s in Social Media and the major brands who seek your expertise. Introduce yourself & add your business link(s) to the LATISM Directory. We support each other and become stronger by promoting our fellow Latinos.

That’s a significant phrase for me: “We support each other and become stronger by promoting our fellow Latinos.” If you are a Latina(o) in Social Media, reach out to your hermanas y hermanos. Join us in the groups we’re building in LinkedIn, Twitter, Facebook, and Twitteros. If there are other Social Media websites and/or groups out there, please comment on this blog post and let me know about you so I can promote you, too.

Tribes need leaders
When I read the latest U.S. Census Bureau statistics regarding the Latino/Hispanic population, I get excited because we’re a growing group within the U.S. population but I get even more excited because we are also organizing ourselves as we grow. I see why Ana Roca Castro and Louis Pagan started Latinos in Social Media because we need to unite and be organized: we’re a tribe, as Seth Godin says (he’s so great: he defined another great sociological phrase into a new meaning).

And just like Seth Godin mandates tribes to have leaders, so we, the Latinos in Social Media and those who are not into Social Media yet, must  have leaders. Here’s why: when you review the Census Bureau stats, take a look at the statistics that cover the upcoming generation: these children need to know that they can grow up in a world without prejudice, with trust, and with education, they can be powerful.

One community, many voices
My new friend, Jennifer, founder of Mami2Mommy, has a wonderful tagline: Una comminidad, many voices. I love that tagline because it’s bilingual and because it sums up who we are: we’re one community yet we have many unique gifts to offer the world, if only they would be more open to our gifts. With that 25% of the U.S. population being Latino/Hispanic children under the age of 5, we need to be watchful of our behavior NOW and set the example for our children and grandchildren: to show them leadership, to teach them that education is critical to one’s success and that the inherent entreprenurial spirit that lies within the hearts of many, many Latinos/Hispanics should be encouraged to come to life and bring good ideas, messages and causes to life and into MOVEMENT so that we continue to evolve as a human race on this one planet we all live on, which, by the way, is no longer seperated into nations or physical countries: we are becoming The Country of Facebook…but that’s my next blog post….please share your comments, I’d love to hear from you. Be sure to leave your twitter name and/or Facebook link so readers and I can connect with you. Gracias!

If you a Latina(o) in Social Media, be sure to add yourself to this directory on LatISM.org:
http://latism.us/directory/?l=view